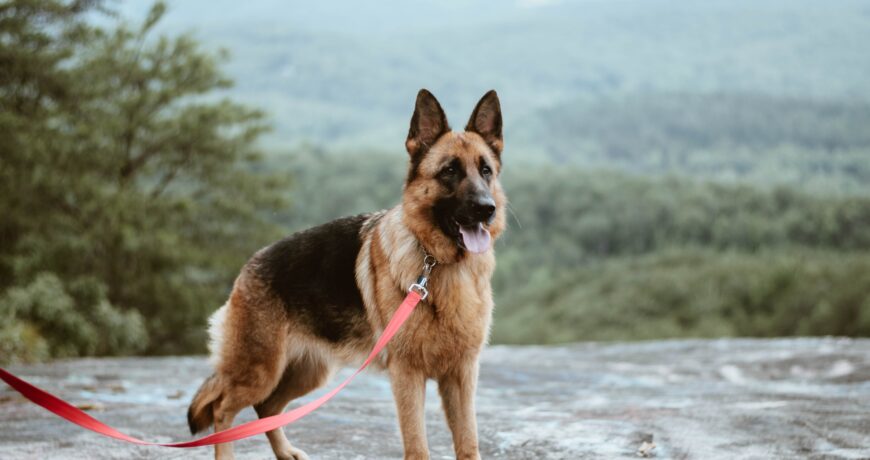 The German Shepherd Dog is one of America’s most popular dog breeds, and for good reason. They’re capable and intelligent working dogs. Their commitment and fearlessness are unmatched. They can also be very adaptive. This breed is referred to known as Alsatian. German Shepherds can be found in shelters and breed-specific rescue, regardless of the original status.

German shepherds are one of history’s most well-known and identifiable breeds. The German shepherd is a late-nineteenth-century breed that originated in Germany. According to the GSDCA, German cavalry commander Capt. Max von Stephanitz discovered a powerful “wolf-like dog” at a dog exhibition with great herding abilities and “no training other than direction.” He bred him to create an ideal working dog, and the result was the forerunner of today’s German shepherd.

Even though the German shepherd’s forebears were herding dogs, von Stephanitz focused on creating a breed for military and police forces rather than herding dogs. German shepherds are still popular K-9 officers for police and military agencies all over the world. Many German shepherds served as messengers, search and rescue dogs, supply bearers, and guardians during both world wars.

German shepherds arrived in the United States in the early 1900s, according to the GSDCA. When returning soldiers were introduced to the United States after World War I, their popularity skyrocketed. The AKC officially changed the breed’s name to shepherd dog during 1917, due to the stigmatization of all things German (similarly, in England, the breed was renamed Alsatian Wolf Dog).

The AKC didn’t change the breed name till 1931. Following WWII, a divide developed between German shepherds produced in America and those bred in Germany. Americans might have been more concerned with aesthetics, emphasizing features that would win inside the ring rather than serve on the field, most notably the dog’s characteristic sloped back. The bright, determined German shepherd, regardless of pedigree, enjoys working on a task. Its gentle attitude and protective demeanor make it a great choice for a family companion.

German shepherds are one of the most popular breeds today due to their wonderful balance of strength and elegance. With enormous perked-up ears or dark, almond-shaped eyes, such huge dogs, averaging 50–90 pounds, have a distinct presence, with a notification look. According to the American Kennel Club, German shepherds have a double coat: their rough outer hair interacts with the rich, soft undercoat to allow the dog to thrive in practically any temperature.

German shepherds, however, are prone to shedding due to their dense coat, and should be groomed many times a week during warmer months to keep your dog—and the home—looking their best.The most frequent color combination for German shepherds is black and tan. Other variants, including like all, black with red, sable, or even the beautiful white German shepherd, are not uncommon, according to the AKC.

The temperament of a German shepherd is reserved, yet not hostile. They’re reticent dogs who take time to develop friends, however, when they do, they’re fiercely devoted. They’re laid-back and accessible with their family, but when attacked, they can be fierce or protective, making them superb watchdogs.

This clever and trainable breed delights on being given a task to complete—any task. From alerting a deaf individual to a doorbell ring to smelling out an avalanche victim, the German shepherd is being trained to perform practically anything.

When they’re left alone for long 6tperiods, they don’t perform well. They get bored and irritated even without the companionship they require, and also exercise or the ability to apply intelligence. A German shepherd who is underneath and neglected by his family is prone to vent his frustrations in unwelcome ways, like barking or chewing.

When they’re puppies, German Shepherds, like all dogs, require early bonding to a variety of individuals, sights, sounds, and experiences. Socialization is important for your German shepherd puppy’s development as a well-rounded dog.

The average lifespan of a German shepherd is ten to thirteen years. Small-breed dog owners may see their pets live to be seventeen or twenty years old. Larger dogs, on either hand, place pressure on their bodies and, regardless of the question of how they’re being cared for, don’t survive as long. A forgotten or under-exercised puppy will die far sooner than eleven years of age.

While these German Shepherds do survive for being thirteen years old, this is unusual and impossible to anticipate. Especially if you don’t know your dog’s pedigree or what health issues they may face as they age.

German Shepherds are typically healthy; however, they are susceptible to some health issues, as are other breeds. Although not all German Shepherds would contract any or all of these illnesses, it’s essential to be conscious of them if you’re thinking about getting one.

Hip Dysplasia is a genetic disorder wherein the femur does not fit into the pelvic socket from the hip joint. Over one or both back legs, many dogs develop soreness with lameness. Arthritis can occur as a puppy age. An Orthopedic Association for Animals and the University of Pennsylvania Hip Improvement Program both offer X-ray testing regarding arthritis. Hip dysplasia puppies must not be bred.

Elbow Dysplasia is a hereditary disorder that affects large-breed dogs. Different development patterns of the 3 bones that form the dog’s elbows are hypothesized to become the source of joint laxity. This can result in excruciating lameness. Your veterinarian may suggest surgery to address the condition or pain medication to alleviate it.

Gastric Dilatation-Volvulus:Bloat is a life-threatening illness that affects huge, deep-chested dogs such as Golden Retrievers. Particularly if they are only fed one substantial meal per day, eat quickly, drink a lot of water afterward, and move frequently. When the tummy is inflated with gas or air, it twists, causing bloat. Because the dog can’t belch or vomit to get rid of the extra oxygen within his tummy, the usual flow of blood from the heart is slowed. The dog’s blood pressure falls, and he becomes shocked. The dog may die if emergency treatment is not provided right away. If your dog has a swollen tummy, profuse salivation, and retching without vomiting, it could be bloat.

Degenerative myelopathy is a debilitating illness of the spinal cord, precisely the section of the cord that transmits information about the rear legs to the brain. Dogs with DM appear to be unaware of their back legs and are unable to move them appropriately. The dog becomes unable to walk as the sickness worsens. The dog is usually not treated and is euthanized. For a few rare instances, however, the illness is caused by a deficiency in vitamin-12 and vitamin E. Vitamin supplements may help to stabilize the situation if this is the case.

Exocrine Pancreatic Insufficiency is a pancreatic hereditary disorder in which the cells that create digesting enzymes die. As a result, the dog’s ability to digest and absorb food has been compromised. Gas, loss of appetite, weight loss, and changes in faces are the initial indicators of the disorder. The dog becomes extremely thin and hungry. EPI is identified with a simple blood test, and treatment is very straightforward: pancreatic enzymes are administered to the dog’s food. Many dogs recover with adequate medical care.

Allergies: German Shepherds can have a wide range of allergies, from contact allergies to food allergies. Allergy symptoms in dogs are similar to human allergy symptoms. If your German shepherd is itching, licking its paws, or rubbing its face excessively, consider an allergy and consult your veterinarian.

German Shepherds were trained for graze flocks throughout the day being designed for action. This means individuals have a lot of energy to expend through regular exercise.

Expect problems if you leave them alone for long periods of time without exercising them. Boredom and inactivity cause chewing, digging, and barking. The German shepherd requires both physical and mental activity (jogging, dog park romps) (training exercises like agility or obedience competitions).

German Shepherds, like many herding breeds, bark a lot. Barking isn’t always a bad thing, but it might be if your dog is bored. Each German shepherd’s dog training must include understanding the “Silent” command.

German Shepherds like chewing and can damage most objects with strong jaws. If they gnaw on the incorrect thing, they risk damaging their teeth, swallowing something poisonous, or even choking. Give your dog secure chew toys or bones so they may entertain themselves while you aren’t playing with them.

Elevated dog food with so much nutrition the breed requires would be suitable for the dog’s ages (puppy, mature, and senior). Table scraps can upset the stomach, so use them carefully, especially avoiding cooked bones and high-fat dishes. Small portions of biscuit or kibble can be used as training treats. Vitamin and mineral supplements should not be required if you feed a high-quality diet. Small amounts of yogurt, cooked veggies, or eggs could be good for food. If you’re worried about the dog’s size and nutrition, consult the veterinarian.

Your German shepherd puppy’s health depends on a well-balanced diet. Puppies of large breeds must be given a special joint-healthy chow. Adult dogs, too, must have their caloric needs met without overindulging. Obesity might result from overeating, which has a negative impact on their overall health. To improve their health, senior dogs will require a special composition.

The German Shepherd Dog’s dual coating is medium in length and consists of a dense, rough, but close-lying outer coat and a softer undercoat. The breed is low-maintenance, requiring only a brief cleaning every several days or so to remove loose hairs, and they do shed heavily once or twice per year. More regular cleaning will help regulate the level of hair which ends up throughout the home and on the furnishings during these times. The German shepherd simply requires a bath now and then. When their nails aren’t worn down naturally, it’s essential to cut or crush them once a month, as lengthy nails can create pain and structural problems.

The German shepherd, as a very active or sporty breed, requires enough exercise to maintain both physical and mental health. If your dog isn’t getting enough exercise, he’ll get frustrated and start acting out. Begin with small daily walks and game sessions in a secure enclosed area with a puppy.

Remember to keep the dog on a leash at all times, as the strongest dog can become sidetracked and ignore commands. Jumping, herding, tracking, or dock diving are all exciting and gratifying activities for both the dog and the owner.

In addition to food, puppies require adequate activity. The three-month-old GSD can walk for fifteen minutes, while a one-year-old GSD may exercise for an hour, according to experts. They should not play upon rough surfaces and go downstairs. Hip dysplasia, a severe ailment that can produce limping, can be caused by early abuse of the dog’s hips.

The dog must be regularly exercised for an hour or two after reaching the age of two. This will maintain them in excellent condition. Dogs’ behavior and health are affected by insufficient stimulation.

Price of a German shepherd in India