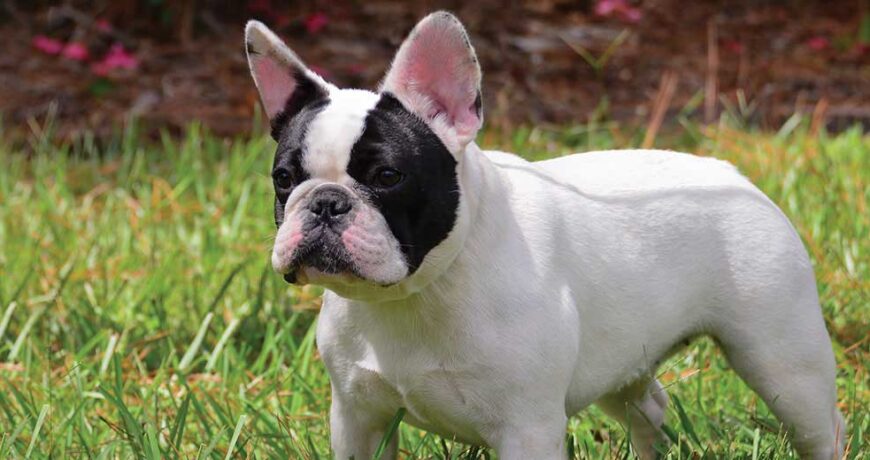 The French Bulldog is a little dog with a big personality. The name “French” refers to the dogs’ rumored origin in Western Europe, around France. These days, the French Bulldog’s popularity has spread worldwide as its intelligent and playful demeanor has won over dog lovers everywhere. Tiny but heavy-muscled with a large head and bat ears, these pups are often called “Frogs.”

Introduction to the French Bulldog

The French Bulldog, or “Frenchie” as they are sometimes called, is a small but muscular dog breed with a unique appearance. They were originally bred in England in the 1800s to be a miniature version of the English Bulldog. The French Bulldog is now one of the most popular dog breeds in America.

French Bulldogs are known for their stout build, large head, and bat-like ears. They come in a variety of colors including brindle, fawn, black, and white. French Bulldogs are loving and affectionate dogs that make great companion animals. They do well in small spaces and don’t require a lot of exercise.

If you’re looking for a lovable lapdog with an adorable face, the French Bulldog may be the perfect breed for you!

What do you need to know about French Bulldogs?

French Bulldogs are a small breed of domestic dog. They are the result of a cross between the English Bulldog and the French Terrier. They were first bred in England in the 1800s, but they gained popularity in France in the 1900s.

French Bulldogs are known for their laid-back attitude, and they make great companion dogs. They are also relatively easy to train and are not known for being barkers. However, they do require regular grooming and exercise, and they can be susceptible to health problems such as hip dysplasia and respiratory issues.

The average life expectancy of a French Bulldog is about 10 years, though some may live longer. The median lifespan for this breed is slightly shorter at 9 years. However, with good care and nutrition, many Frenchies can enjoy a long and healthy life.

One of the contributing factors to the relatively short lifespan of the French Bulldog is their brachycephalic skulls. This means that they have shorter snouts and narrower nostrils, which can make breathing difficult – especially in hot weather or during strenuous exercise. They are also more prone to snorting, snoring, and reverse sneezing due to their anatomy.

While these health concerns are something to be aware of, they should not deter you from considering a French Bulldog as your next furry friend. With proper care and attention, your Frenchie can enjoy a long and happy life by your side.

Health Issues and Conditions: What are some common health problems that may affect your french bulldog?

There are a variety of health problems that may affect your french bulldog. Some of the most common include:

Allergies: French Bulldogs are prone to allergies, which can cause itchiness, skin irritation, and other problems.

Eye problems: French Bulldogs can be susceptible to a number of eye problems, including cataracts, glaucoma, and corneal ulcers.

Ear infections: Ear infections are common in French Bulldogs due to their long, floppy ears. These infections can be painful and lead to further complications if not treated promptly.

Hip dysplasia: Hip dysplasia is a condition that can cause pain and lameness in the hind legs. It is caused by a malformation of the hip joint and is more common in larger breeds of dogs.

Temperament: How does an owner work with a stubborn, difficult personality?

If you’re looking for a dog with a difficult, stubborn personality, the French Bulldog is definitely the breed for you. These dogs are known for their independent streak and their reluctance to obey commands, which can make them very challenging to train. However, with patience and consistency, it is possible to work with a French Bulldog’s stubborn personality and teach them the basics.

One of the most important things to remember when working with a French Bulldog is that positive reinforcement is key. These dogs respond best to praise and rewards, so be sure to give plenty of both when your dog is behaving well. At the same time, avoid getting angry or frustrated with your dog; this will only make them more resistant to training.

It may take some time and patience, but with the right approach, you can successfully work with a French Bulldog’s stubborn personality.

French Bulldogs are a unique breed of dog that has many distinct characteristics. They are one of the most popular breeds of dogs in the world, and their popularity is only increasing. Because of their unique appearance and temperament, they require specific training to help them thrive in their home environment. Here are some tips to help you train your French Bulldog:

The French Bulldog is a great dog breed for those looking for a small, affectionate companion. They are relatively easy to care for and train, and they make great family pets. However, it’s important to remember that they do require some exercise and attention, so be prepared to give them the time and energy they need. If you think the French Bulldog might be the right dog breed for you, be sure to do your research and find a reputable breeder before making your decision.